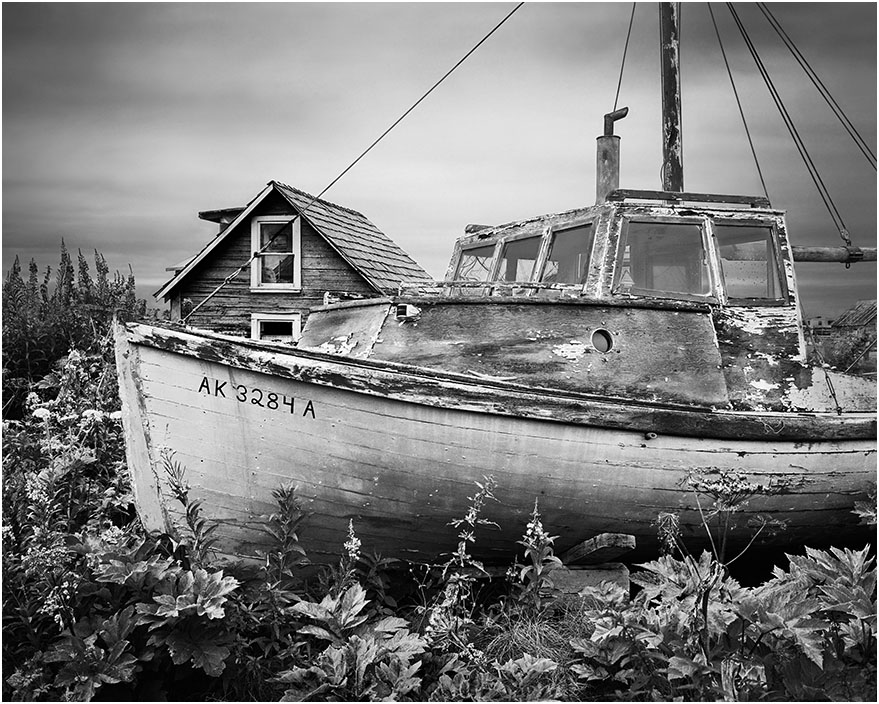 This 2001 photo of the old fishing boat in Ninilchick, Alaska, was taken on a visit to Alaska to see some of my favorite places identified from an ealier trip 32 years prior.

In 1969 I spent the summer working the Anchorage, AK. A summer in Alaska is a very beautiful and interesting experience for a life-long Californian. One of the places I recalled as particularly picturesque was the little fishing village of Ninilchick, on the Kenai Peninsula.

Ninilchik (from the Athabaskan word meaning "lodge is built place") was a Dena'ina Athabaskan lodging area used for hunting and fishing. The first people who would permanently stay in the village were, apparently, Russian traders. A Russian Orthodox church stands on a hill just above where this shot was taken.

Fortunately, my return to Ninilchick after a 32 year absence was not a dissapointment. While the village had changed, it was still picturesque.

However, what shocked me on this return trip to Alaska was the extent to which the glaciers had receded over that 32 year period. Climate change in the northern regions is way more dramatic than what we see in the rest of the U.S.

This image was recorded on Kodak medium format B&W film called "T400CN." This B&W film used color negative technology to give a finer (or more difuse) grain structure. In its day, it was what some considered the state of the art for "high speed" ISO 400 film if fine grain was the goal. (And note that I still felt compelled to "clean up" the grain a bit in an earlier version of Photoshop.