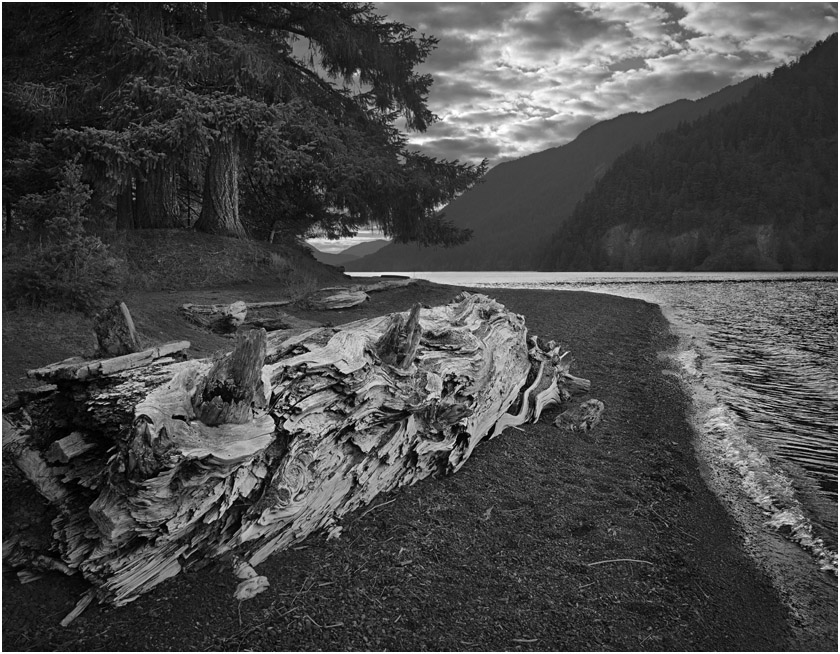 Crescent Lake is on the Olympic Peninsula in Washington. It and the lodge that goes by the same name are venues I have been visiting since childhood. The lush forests of the Northwest result in many old logs being washed onto the beaches along both the ocean and lake shorelines. Driftwood, like the old snags in the Sierras and elsewhere, seem to often be significant subjects in my photographs.

To capture the depth of field needed for this image, I used two frames with different focus points. When a digital camera is on a tripod, "stacking" the images to make a single one with everything in focus is part of what landscape photographers do these days. It is in many respects a more flexible way to capture extreme depth of field than the old "tilt the lens" method used on old 4x5 view cameras, and also used on the Rollei SL66, which was my main camera during many years of serious landscape photography in the film era. This image was captured by a Leica M9 and the Leica 28mm lens.

A large 32 by 40 inch print on matte canvas is currently offered through Gallery Los Olivos . It is the second of these large canvases that I've made -- all images included. As such, I refer to it also "artist's canvas proof #2."

To go to my home page, please click here.