Clearing winter storms often present outstanding photographic opportunities. Those who go to Yosemite only in the Summer miss special times.

Many viewers don't recognize this photo as being of Yosemite Falls -- or where it should be. In the winter the Falls are barely visible. The watershed that feeds the Falls mostly dries up by the end of summer, and in winter the water is mostly in the form of snow. As a result, Yosemite Falls in the winter is a small strip of ice on the cliff.

I usually don't date my photos, but the date on this one is significant to me. This photo was taken while I was chaperoning my daughter's sixth grade Solvang School class week-long field trip to Yosemite in December 1997.

This photo was taken with a Rollei GX camera -- a classic twin lens reflex that can still make images that are close to the pinnacle of medium format film technology. Anticipating both hand held shots of the kids, as well as landscape photos that I would enlarge to wall display size, I used Kodak's T400CN black and white film that used color negative technology. This represented the best compromise of speed and relatively fine grain for medium format film technology.

I recently re-scanned the negative with the Nikon 8000 scanner. This results in prints that are notably sharper than prints made in the past.

In part to pay homage to the classic "6x6" (cm) or "2 1/4" (inch) medium format film technology, I've printed the full negative area instead of the more common 8x10 ratio. The "8x10" crop is shown below. Prints are available in either style. 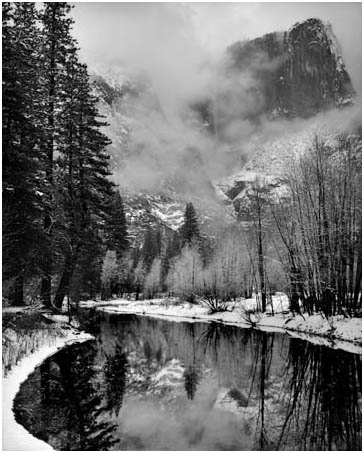